If you’re a coffee drinker like me, then your day doesn’t start until after a cup of coffee or four; and this doesn’t change when out backpacking either.

In fact, it becomes an even more crucial jump start to the morning in order to hit the trail at a reasonable time. Beyond the dose of caffeine, I enjoy the taste of coffee and the ritual behind it. If it weren’t for the latter two, a caffeine pill would more than suffice.

I am admittedly a coffee snob enthusiast and make coffee at home with obsessively accurate water temperatures and employ the use of a scale and timer. Beans are purchased every other week in small batches from a local roaster and ground daily in a way-too-expensive burr grinder. Then I brew in a French press, moka pot, AeroPress, or Chemex, depending on my mood and laziness. It’s more coffee equipment and paraphernalia than anyone possibly needs. Snobbery confirmed.

This amount of ridiculousness doesn’t end at home either, when I’m car camping the go-to coffee solution is an AeroPress and a Hario hand grinder. It’s absolutely the tastiest, most portable, and easiest to clean coffee solution... for car camping, where weight doesn't matter.

However, even the car camping coffee solution is unreasonable for backpacking, and I’ve been known to backpack with a French press a time or two. Enjoying a good cup of coffee on an extended backpacking trip means you’ll have to deal with at least one, if not all of the following: extra weight, inconvenience, and garbage. Cowboy coffee is the lightest you can get for a backpacking brew using real beans, but you’ll have to haul around wet coffee grounds with you (because you’re following Leave No Trace, right?) 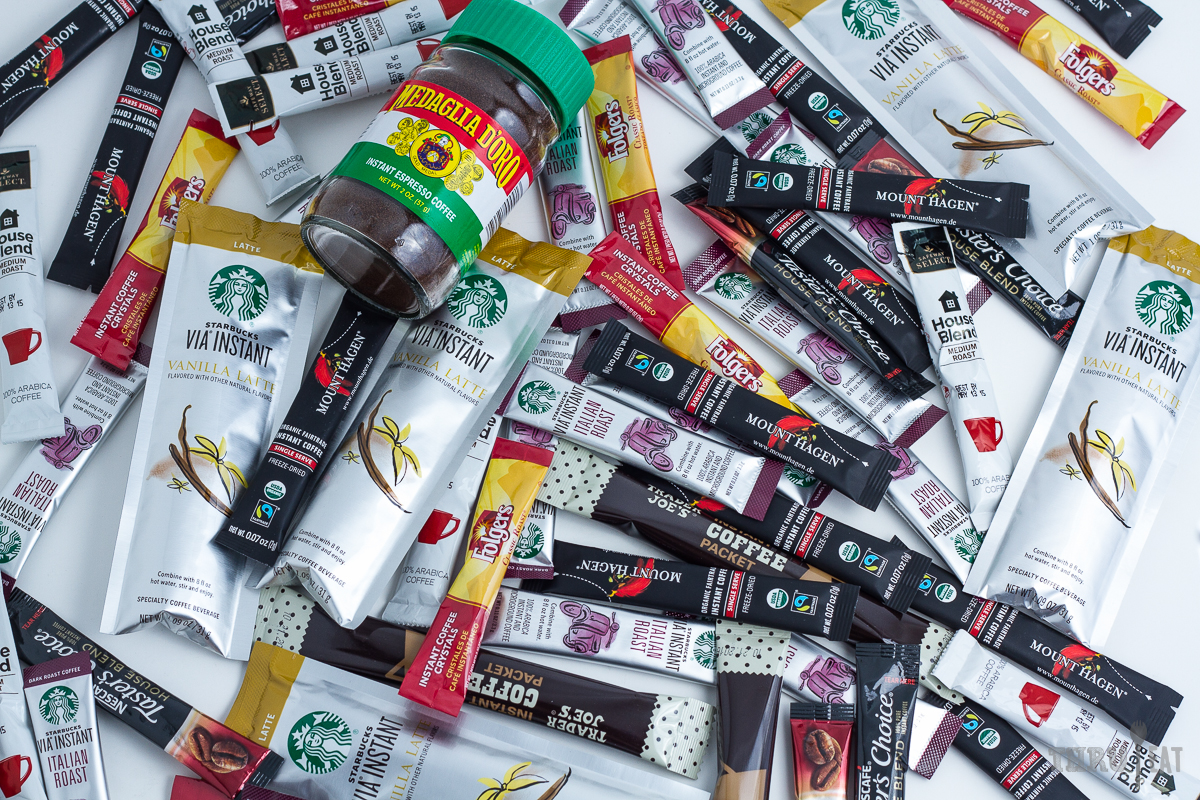 The only reasonable coffee solution for a backpacker is instant coffee. Which is pretty much the antithesis of coffee snobbery, but we all need to make compromises somewhere! Instant coffee will never be as good, but the trade off in taste for the convenience and incredible lightweight is more than well worth it.

So this brings us to the heart of the problem. Which instant coffee is the best? There are many different brands available, but which one tastes the most like a fresh cup of coffee? The only way to find out is to do a taste test. I went out (to a couple grocery stores) and picked up all the instant coffee I could find. The logic was if i could find it in a store, I could find it online for even cheaper, and it would probably be halfway decent tasting.

Our criteria for the taste test were as follows: 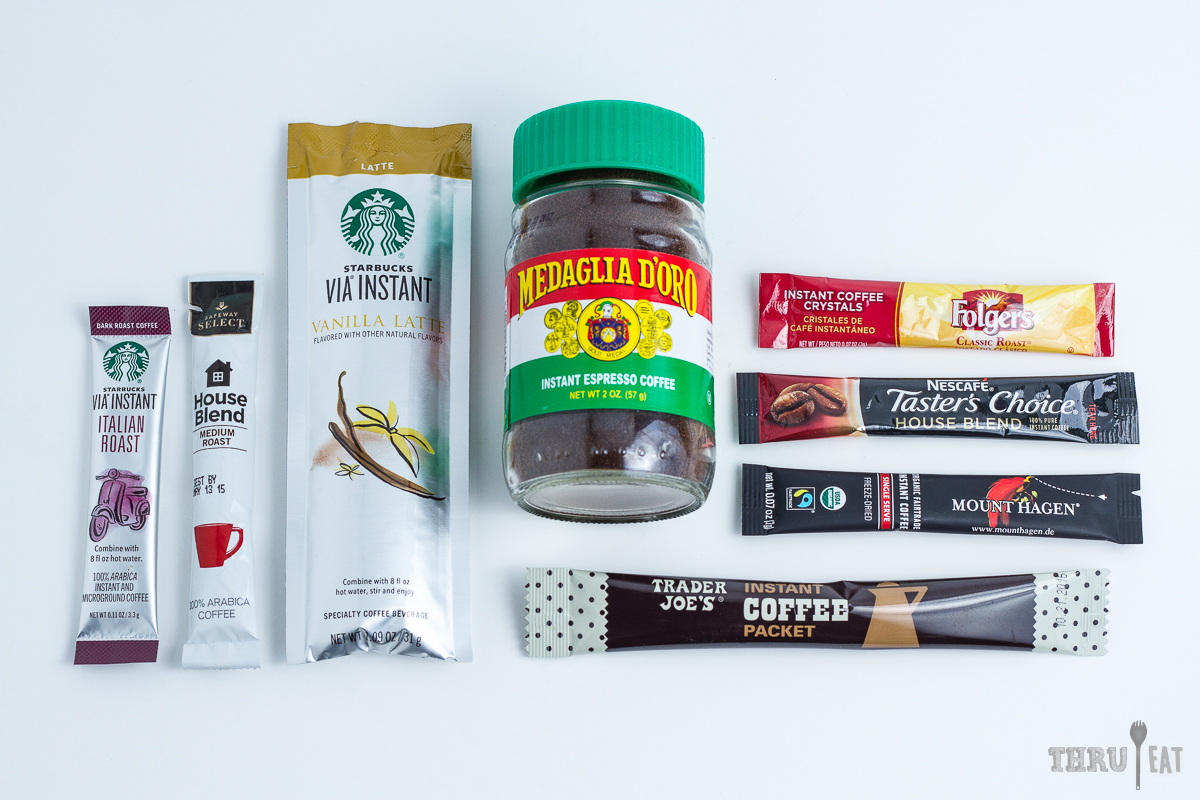 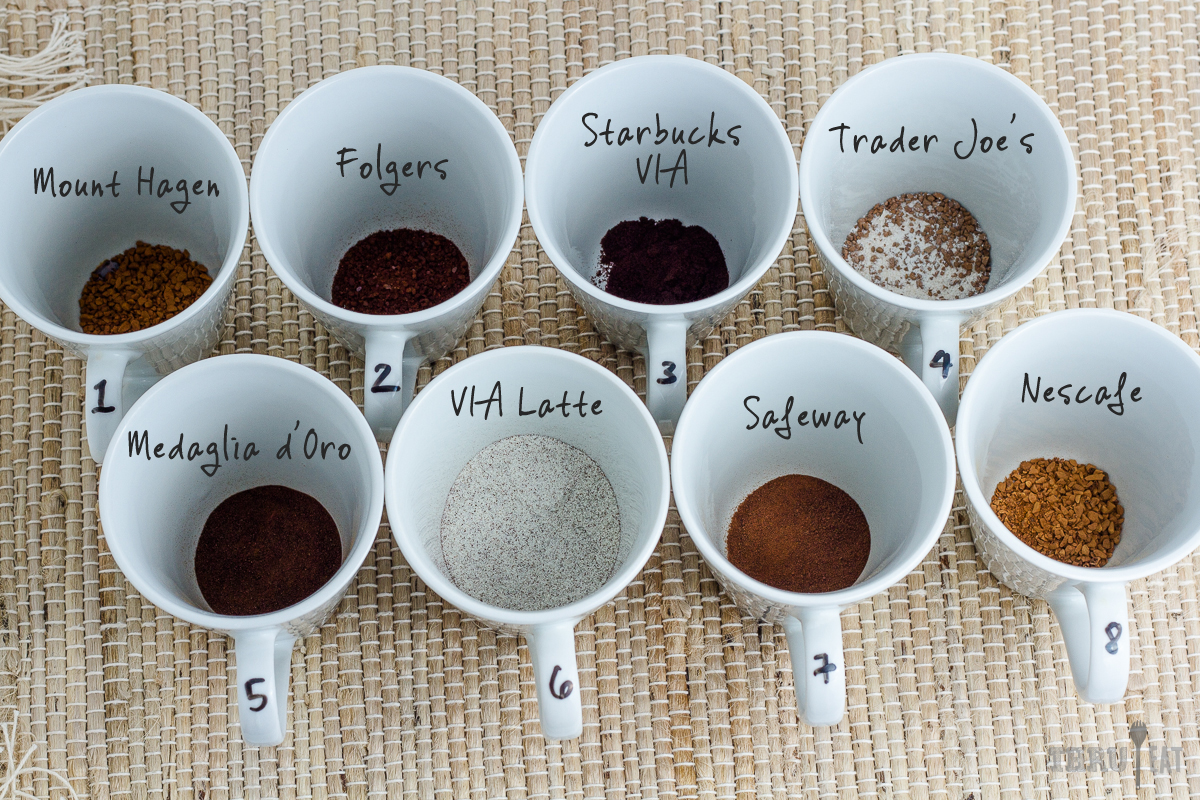 Each instant coffee has a distinct look in powdered form. 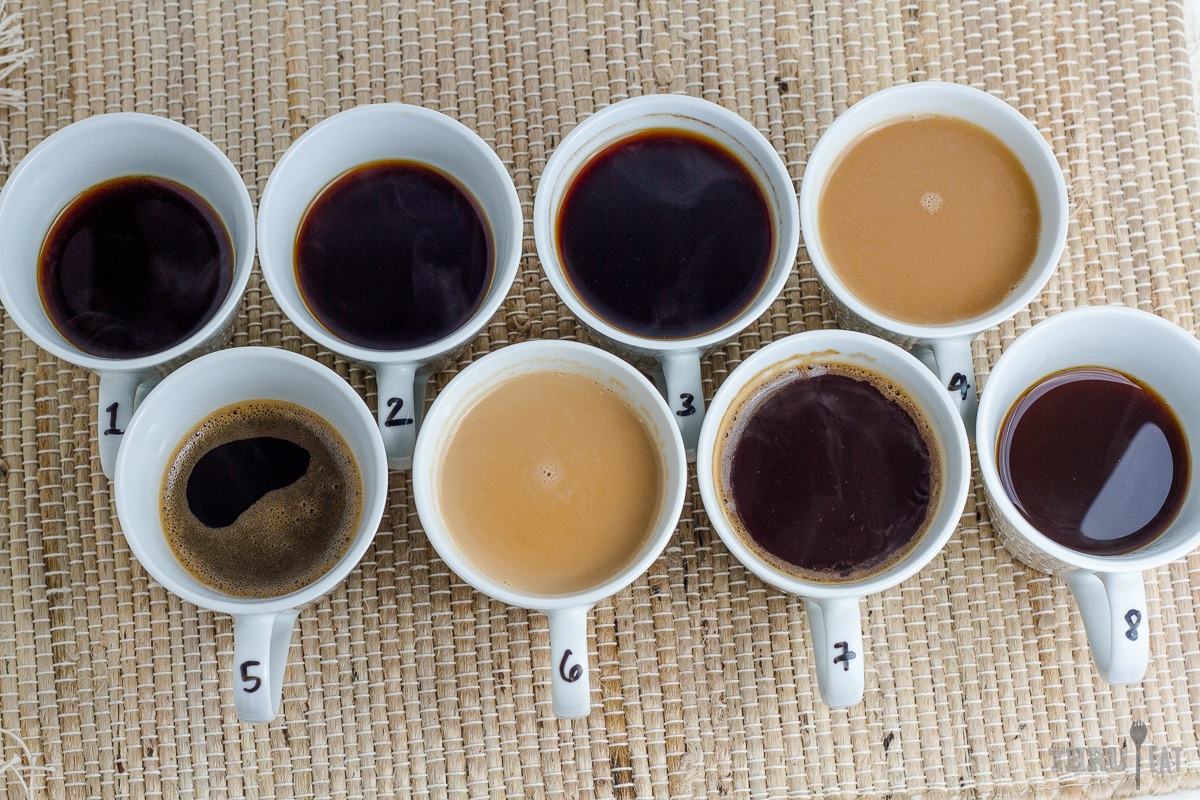 And a distinct look when brewed too.

Our test was by no means scientific, and moreover, taste is incredibly subjective but the results are pretty telling. While we’re not huge fans of the company I think it’s fair to say that Starbucks VIA is hands down the best instant coffee. This isn’t all too surprising since they’re the only instant coffee that includes a “microgrind” (a Starbucks patent-pending technology). It obviously makes the coffee taste significantly better.

So if you’re a black coffee drinker and want the best, look no further than Starbucks VIA. If that price is a little hard to swallow, Mount Hagen is also really good and nearly half the cost (and organic if that’s important to you).

If you like your coffee with some creamer, again Starbucks VIA is the winner, but if you’re on an extreme budget don’t overlook Nescafe; or Mount Hagen if you can step up your budget.

While it’s not for us, those who like really sugary caffeinated drinks will probably satisfy their sweet tooth with the Starbucks latte.

Truth be told, we’ve been backpacking with Starbucks VIA for a while now and it has always been our goto coffee solution. But being able to taste each coffee side by side we now know there’s nothing that can come close (except Mount Hagen). 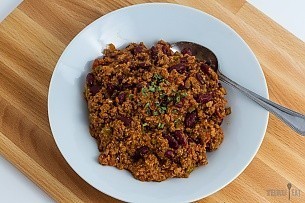