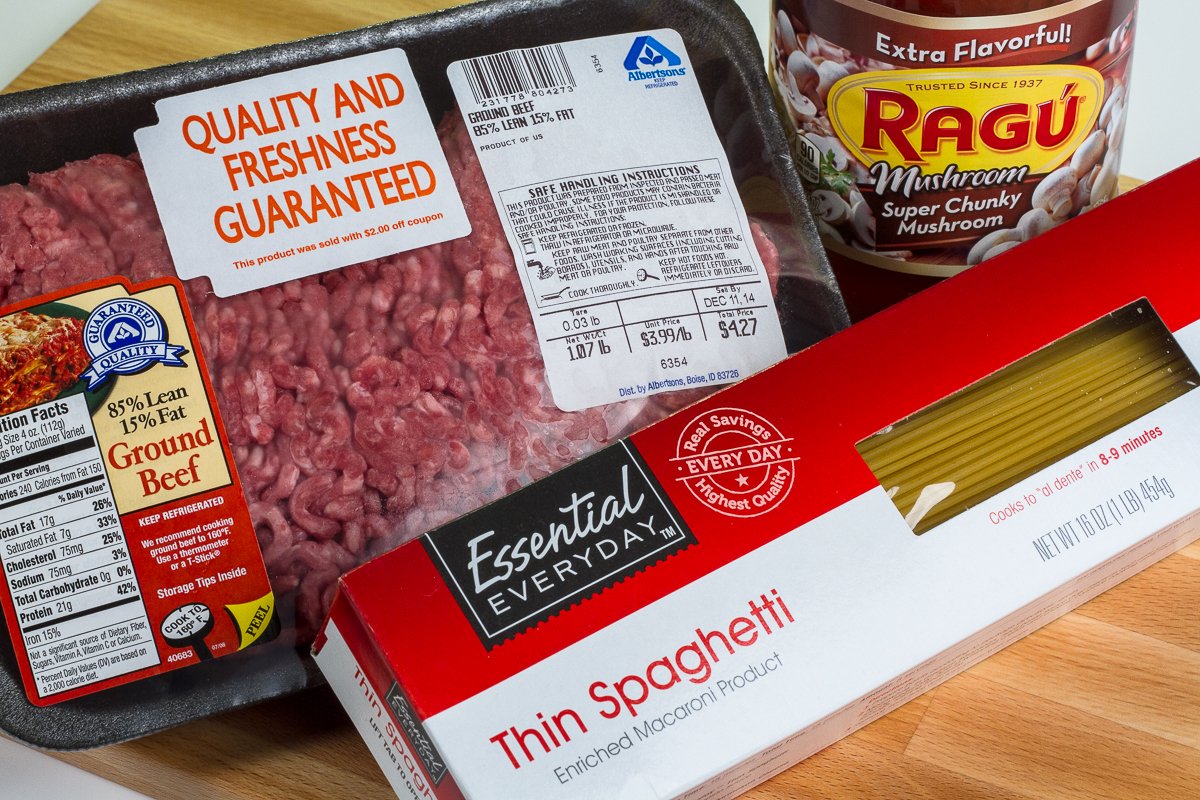 Spaghetti in one form or another is probably the most popular camping food known to man. So simple, yet so delicious, filling, nutritious, and most importantly for those of us who spend inordinate amounts of time in the woods, easy!

It’s a humble food with many great memories attached to it, and naturally, a great food for backpacking. It also helps that it’s ridiculously affordable, but I’m no Giada De Laurentiis; I don’t purchase imported small-batch artisan spaghetti noodles or make my own sauce from organic tomatoes grown in my raised-bed rooftop garden irrigated with collected rainwater.

No sir, I buy the cheapest spaghetti noodles from the clearance rack. And get this, I go for the thin spaghetti and whatever sauce is cheapest. Think Ragu, Prego, and if I’m feeling particularly fancy, Classico! What I’m getting at is, everyone has their idea of the best spaghetti, this just happens to be mine; it’s my comfort food that I was raised with. If your idea of good spaghetti involves canned tomatoes from last year’s harvest and fresh basil from your window sill, then by all means, that’s your best spaghetti.

I’m not trying to give you the best recipe for spaghetti. Chances are likely you already have that, maybe it’s something passed down for generations or something you picked up last week on Epicurious.com. It doesn’t matter how you enjoy spaghetti, all that matters is that you want to bring it with you into the woods with minimal fuss.

Of course you could pick up a Mountain House or Backpackers Pantry, and if that’s your favorite spaghetti then you’re work here is done. It’s definitely not bad and I’ve eaten more than my fair share. After a long day on the trail it hits the spot, but it’s not really what I want spaghetti to taste like. There’s an uplifting element of comfort, safety, and nostalgia when you can eat something familiar on the trail.

So grab your favorite spaghetti recipe, a pencil, your biggest wine mug, and follow along as I make the best dehydrated spaghetti. 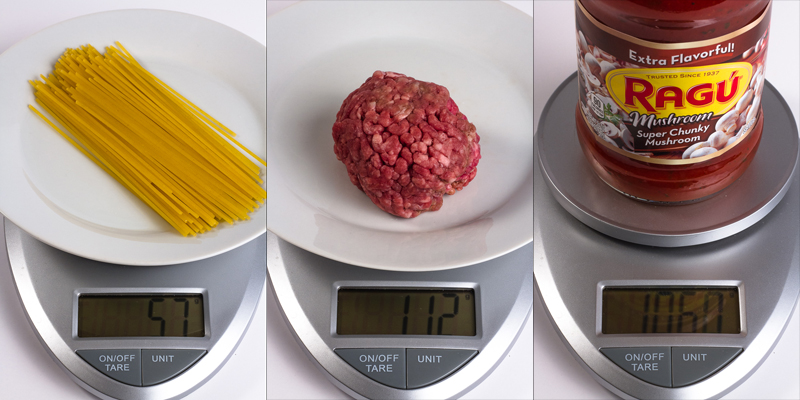 I don’t typically weigh my food, but when you’re calculating calories per ounce, per meal, it makes it handy to know if you’ve packed enough food. Also it’s just plain fun to see how much weight you’ve shaved off your pack when you compare with the final dehydrated weight.

I got too lazy to weigh out the sauce onto a plate so I just weighed it unopened and then weighed it again after I used all the sauce I needed. It came out to 64 grams of sauce used.

Cooking 57 grams of spaghetti noodles causes it to increase to 143 grams, that’s a 250% increase in weight. While you can carry uncooked noodles and cook it as needed on the trail I wouldn’t recommend it, for the sake of fuel savings. Cooking it at home and then dehydrating will bring it back to more or less the same weight it was before but you now get the added benefit of much faster cook time on the trail. In fact, the goal of dehydrating for the trail is to remove the need for actual cooking. We’re just looking to add water and reheat a meal, and occasionally holding at a low simmer for a short period of time.

Take note, up until this point nothing has been mixed together. This is particularly important if your sauce contains any proteins.

If you’re adding proteins to your sauce be sure to prepare it appropriately. In this case with ground beef I cooked it in a pan on low heat to avoid browning and to render out all the fat. Once it’s cooked, rinse it under hot water with a strainer. Yes, rinse your ground beef in the sink. Let me say that again, rinse your beef. Get in there with your hands and break up the pieces into more uniform smaller pieces. If you’re doing it right you should feel the beef squeaking in your hands. If you haven’t figured it out yet, the goal is to wash out as much fat as possible. Using hot water allows the fat to remain liquid and actually wash off. Starting with a leaner meat means less rinsing.

Once you’re done cooking noodles, preparing sauce, and cooking meat, the instinct might be to start constructing your final dish and putting it altogether. STOP. Don’t put it together.

To prove this to you, I split the spaghetti into two equal batches. One with the three ingredients dehydrated separately, and the other all mixed together and then dehydrated. I’ll let the photos speak for themselves. 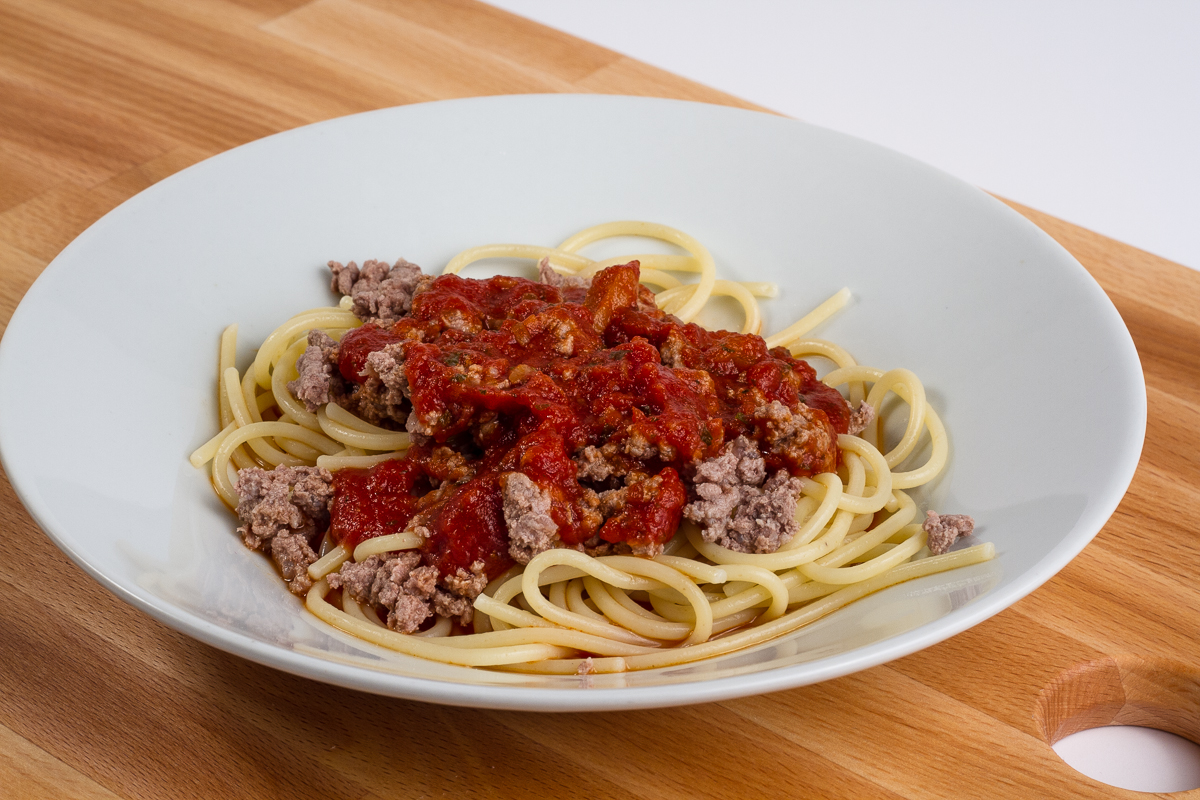 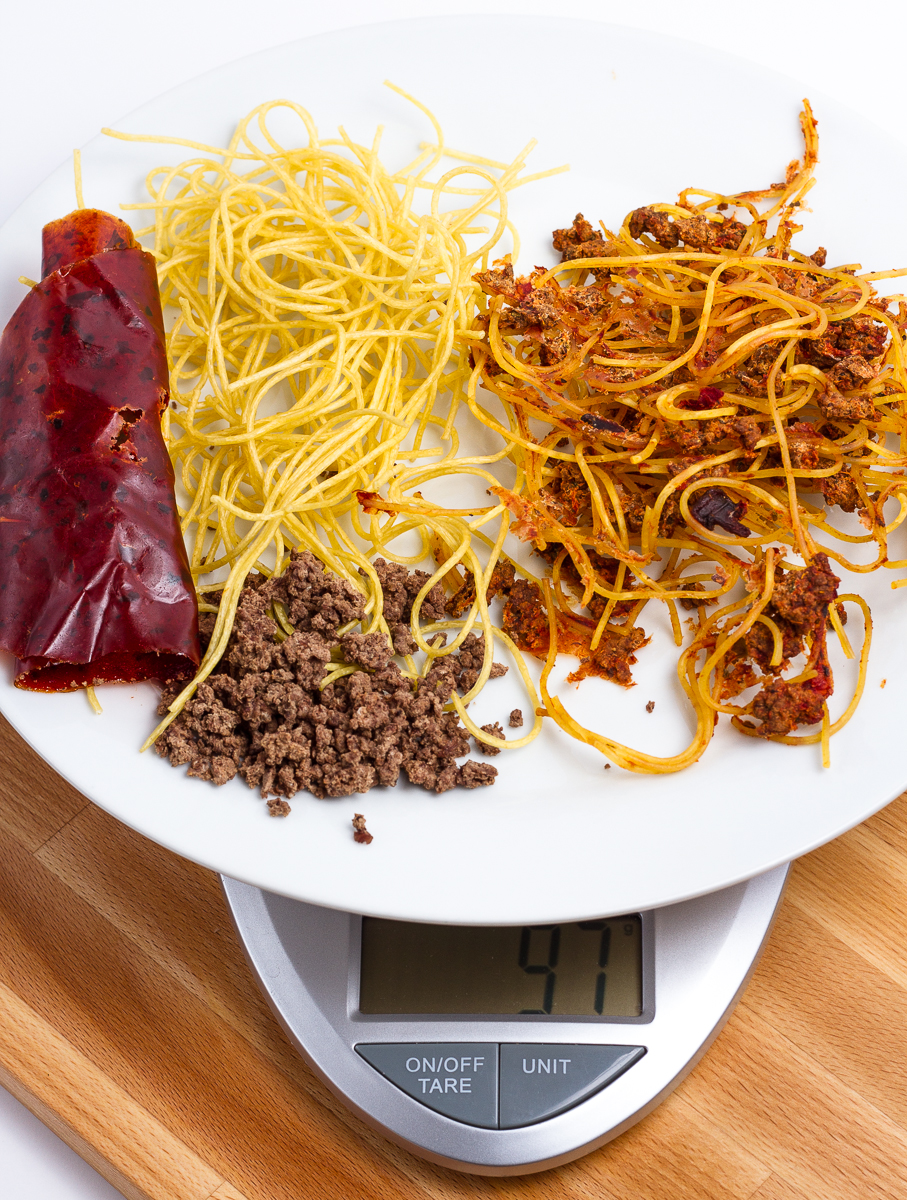 The left half of the plate are ingredients dehydrated individually. The right half is the previous photo of the constructed dish. Both sides contain the same weight in noodles, beef, and sauce. They weigh exactly the same, but obviously the combined half takes up less volume. The sauce and meat has worked its way into the little nooks and crannies between the noodles. A little smashing and stuffing and the left side would fit into the same space. No big deal. 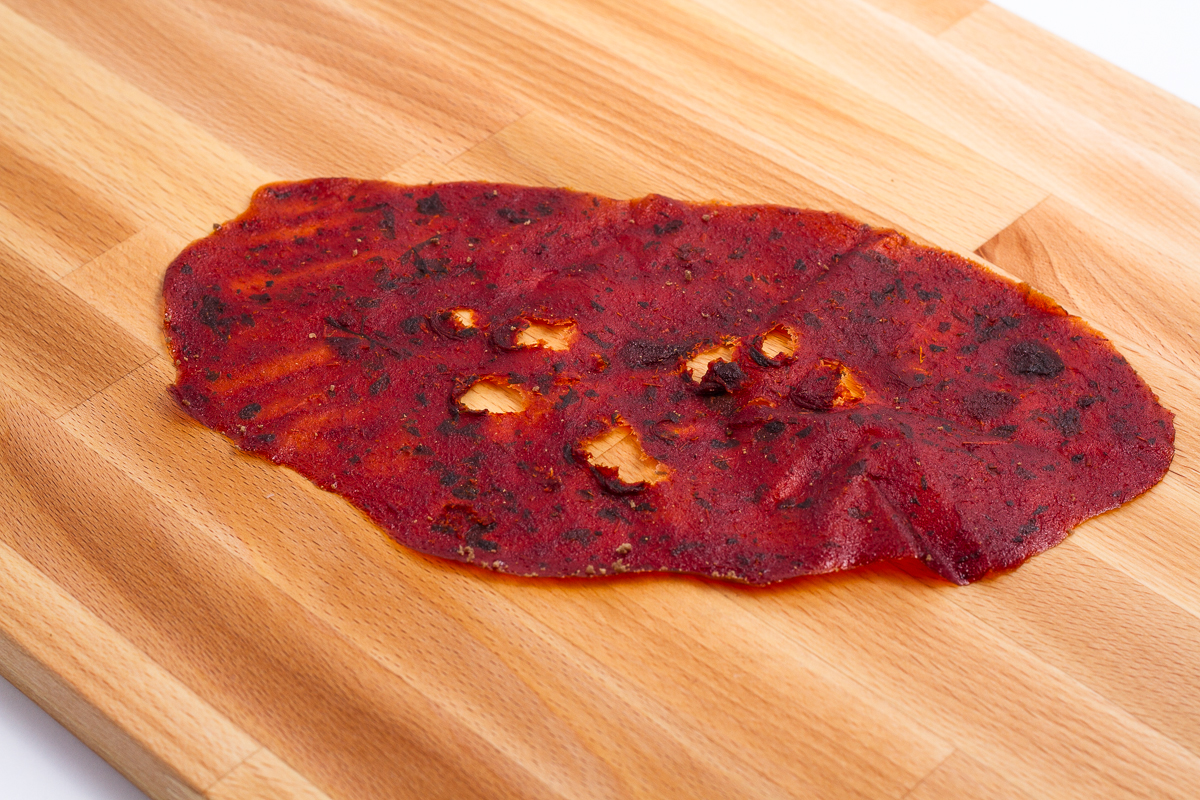 Here’s a close-up of the spaghetti sauce, a nice leather consistency. Disregard the finger holes in the center, I poked at it multiple times to check for dryness. It’s quite a bit tacky because Ragu is pretty sweet. The texture of your leather will depend heavily on the sugar level of your sauce and how thin it’s spread. Tip: spread it thin!

Let’s get down to the nitty gritty and butter our bread. 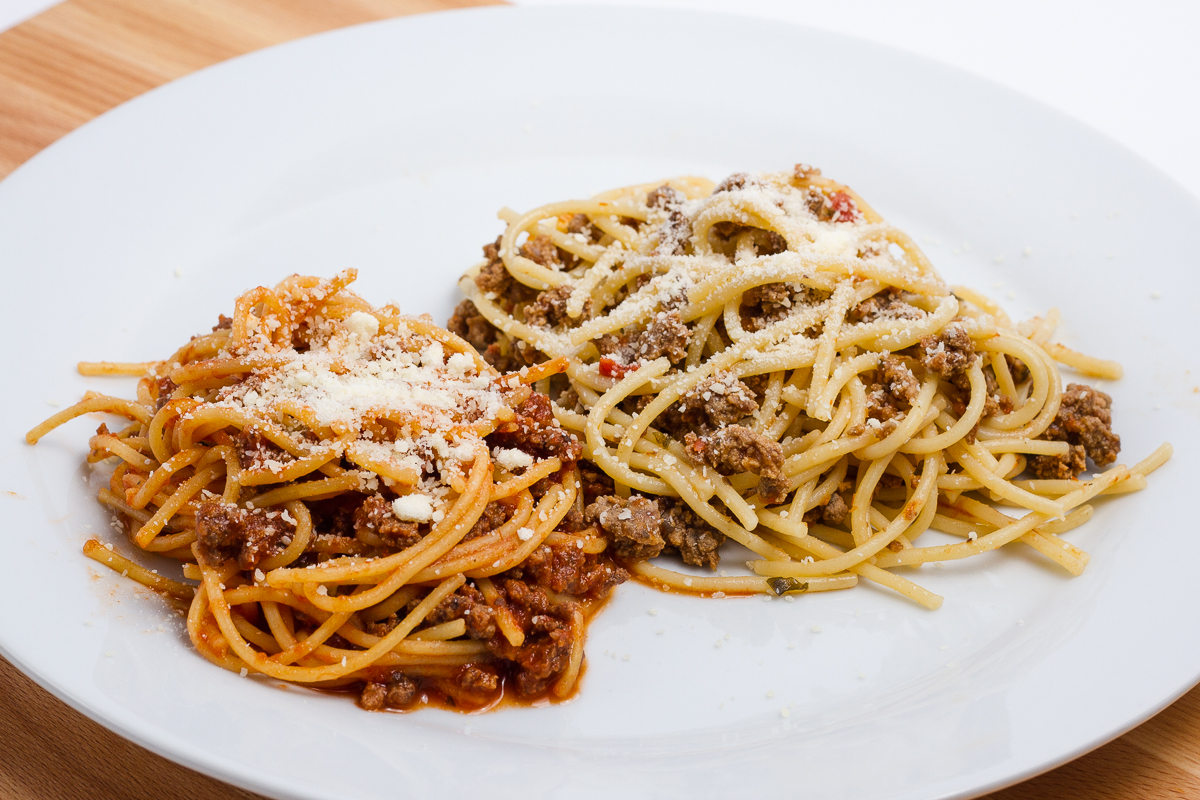 The left side of the plate is the ingredients dehydrated separately and then rehydrated. The right side is the one combined together before dehydration. 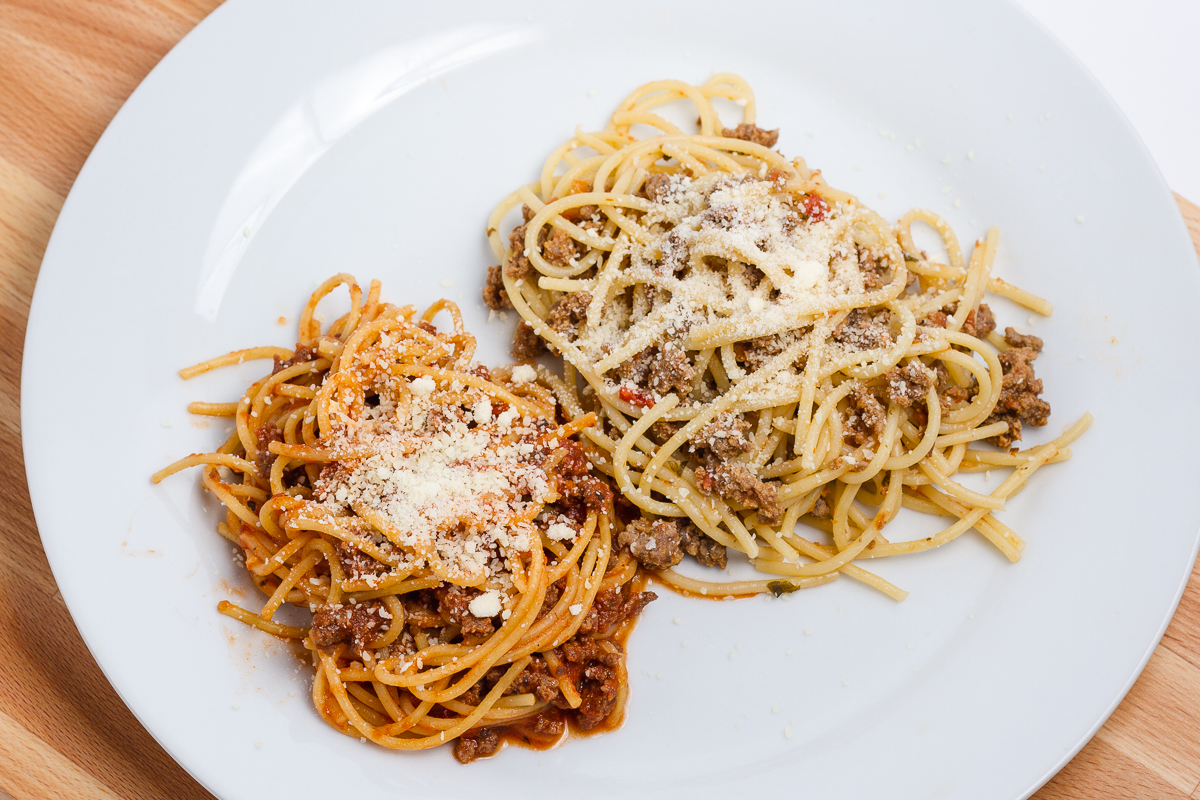 Ingredients dehydrated separately is the clear winner. Why?

Each ingredient requires a different dehydration temperature and time (you can find those elsewhere on this site), allowing it to dry to the perfect state. When it’s combined together and dehydrated en masse it takes as long as the longest ingredient to dry. More importantly, when it comes time to rehydrate you only have one shot.

In order to get the best dehydrated spaghetti, boil up a pot of water large enough to completely submerge your beef and noodles. Add the ground beef to your pot and simmer for 5 minutes by itself. Then add your noodles and let that simmer until it’s rehydrated to al dente. Finally, drain out the majority of water but be sure to retain a bit to rehydrate the sauce; toss in half the sauce leather and stir. Add more water if necessary, but don’t water it down too much, just enough to dissolve the sauce. If at any point you find the meal to be too watery, just dump out the excess liquid. Don’t worry, you still have the other half of the sauce in case you dump out too much. When it’s all rehydrated, drizzle in some olive oil and sprinkle on some parmesan cheese packets from the local pizzeria.